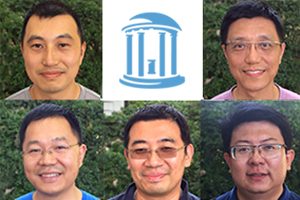 The Program on Chinese Cities visiting scholars are:

The Beijing Municipal Institute of City Planning (BICP), affiliated with the Beijing Municipal Commission of Urban Planning, is an institution providing planning and design services for the greater Beijing area. BICP formulates plans for the city’s infrastructure and transportation, conducts research on current urban policies, provides consultation to government departments and helps establish urban planning codes. It also facilitates academic exchanges with urban planning institutions in various countries across North America and the Asia Pacific. The BICP website in English is located here.

The five visiting scholars are among the core members drafting one of BICP’s largest projects, having developed a general city plan for Beijing for 2017 to 2035, which was approved by the Communist Party of China Central Committee last year. The plan contains targets to reduce air pollution, curb population growth, develop renewable energy and increase green space. In addition to a population cap, the Beijing municipal government intends to limit the extent of developed areas, and encourage a reduction in developed area by 2035. All coal use across the city will be banned by 2035.

In addition to the master plan for the city of Beijing, the BICP has also developed several urban planning projects, including the Conservation Plan for the Historic City of Beijing, the Construction Plan for the 2008 Beijing Olympics and the Zhongguancun Science Park Plan. The BICP has been awarded several prizes for their work in Beijing and nationally, such as the Scientific and Technological Progress Prize and the Excellent Planning and Design Prize.

The Program on Chinese Cities (PCC) was established by Department of City and Regional Planning Professor Yan Song to develop an internationally-recognized research agenda to better understand the impacts of rapid metropolitan development on China’s built and natural environments. PCC is an initiative within UNC’s Center for Urban and Regional Studies. A three-part agenda guides the research activities of the PCC: documentation of China’s urbanization process; analysis of China’s urbanization policies and practices; and global implications of Chinese urbanization.

This article originally appeared at CURS.UNC.EDU and was written by Spence Jorgensen ’18, CURS communications assistant